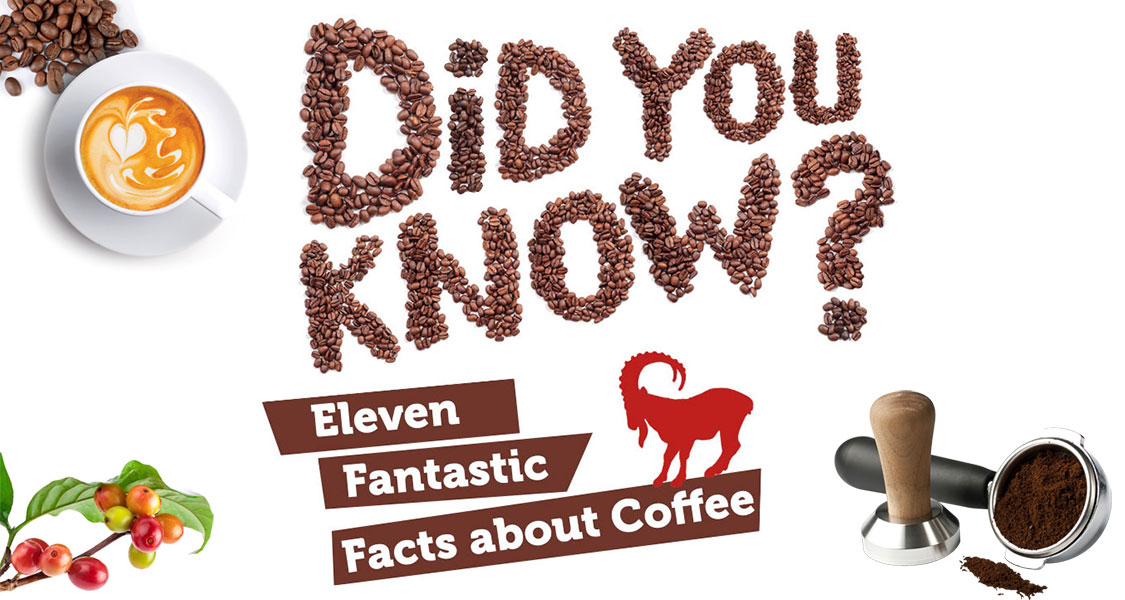 Coffee is a fascinating subject. The world loves coffee and there are many stories of its origin and subsequent rise to become the second largest traded commodity on earth after oil. However, did you know?

Legend has it that 9th-century goat herders noticed the effect caffeine had on their goats, who appeared to “dance” after eating coffee berries. A local monk then made a drink with coffee berries and found that it kept him awake at night to perform his evening prayers.

Before coffee was widely enjoyed as a hot beverage, it was used as an energy food. The coffee berries were mixed with animal fat and formed into bars or balls which were used to stimulate and give energy to those working long hours.

Yes – Coffee is a fruit. Coffee beans as we know them are actually the pits of a cherry-like berry that are grown on bushes. Even though coffee is actually a seed, it’s called a bean because of its resemblance to actual beans.

What do you think the first webcam was built for? Unbelievably it was to check the status of the University coffee pot in a lab in Cambridge. To save people working in the building the disappointment of finding the coffee machine empty after making the trip to the room, a camera was set up providing a live picture of the coffee pot to all desktop computers on the office network. After the camera was connected to the web a few years later.

You will be surprised to know that it used to be a custom in Turkey that if a husband didn’t provide his wife coffee, it was a ground for divorce.

If you love cats as much as your coffee, there is a cat cafe in Korea where you can drink your favourite coffee and hang out with cats for hours.

7. The Most Expensive Coffee in the World is Poo!

Kopi Lowak coffee is considered to be one of the best and rarest brews. The beans are harvested from the faeces of the Palm Civet, An Asian cat-like creature which, feeds on only the ripest coffee berries. The beans are collected from the Civets excreta, washed and roasted. A cup of Kopi Lowak generally costs $25 a cup.

Coffee was first banned in Mecca in 1511 because leaders believed it stimulated radical thinking. And, 16th-century Italian clergymen tried to ban coffee because they believed it to be Satanic. In 1623 Constantinople, a ban on coffee was decreed. Anyone caught consuming coffee was punished, a second offence resulted in the offender being sewn up in a leather bag and thrown in the Bosporus river. In 1746, King Gustav III ordered a ban on coffee as it was believed to be toxic. In 1777, Frederick the Great of Prussia issued a manifesto claiming beer’s superiority over coffee. He argued that coffee interfered with the country’s beer consumption.

Coffee was originally thought to be a cure-all wonder drug in Yemen and Arabia and was taken only at the advice of a doctor. Many viewed coffee as a brain tonic or as a way to stimulate religious visions.